How to improve sleep disorders and sleeplessness? 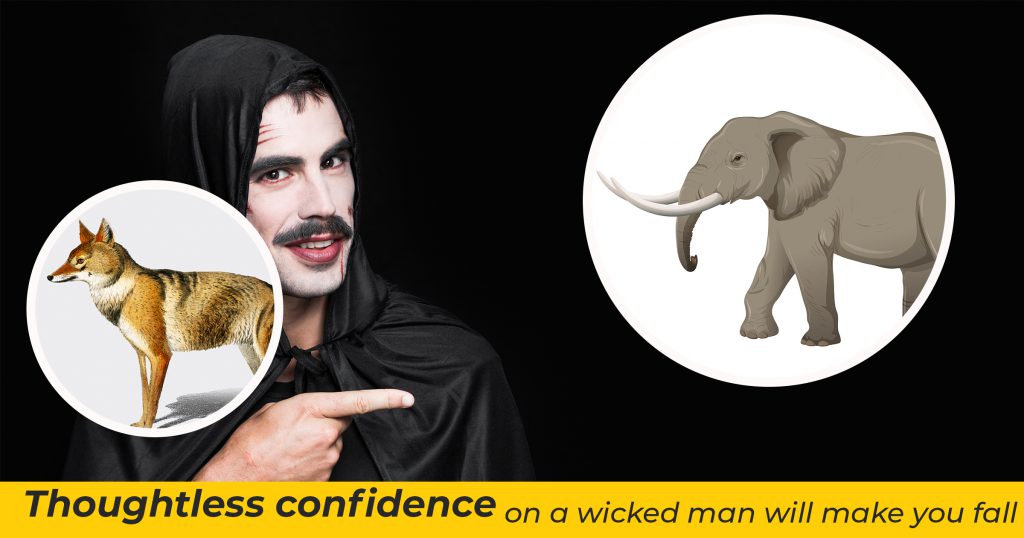 Thoughtless confidence and company of wicked men, make you fall

There was an elephant in Deep forest. On seeing him all the jackals thought to themselves—if by some means this can die, his body will afford us sufficient food for about four months.

An old jackal from among then declared—I will bring about his death by the power intellect.

Then the wily fellow having gone to Elephant and bowed to him touching the ground with the eight parts of his body said—My lord, favor me with a glance.

The elephant asked—Who are you?

He replied—I am a jackal and sent to Your Honor’s presence by all the inhabitants of the forest having assembled together. Since it is not expedient to live without a king Your Honor has been selected, as possessed of all kingly qualities, to be installed as king of this forest. Who is extremely pure as regards his family nobility and conduct, is chivalrous, pious, and versed in politics, is worthy of being a king on earth. One should first obtain a king, then a wife and then wealth: in the (absence of a king, whence can there be wife or wealth? Like rain, the lord of the earth is the support of creatures: life can be sustained, however, even when there is scarcity of rain, but not in the absence of a king. In this interdependent world a man keeps within the bounds duty mostly through the dread of punishment; a man good conduct is difficult to be found and it is through the fear of a punishment also, that a woman of good family approaches her husband, though lean, deformed, sickly and penniless. Your Majesty, therefore, should be so pleased as to come quickly that the auspicious moment may not be lost.

Having said so he rose up and went away.

Thereupon that Elephant, drawn by the lust of a kingdom and running by the way taken by the jackal, got stuck in deep mud.

Then the elephant said—Friend, jackal, what should be done now? I am plunged in mud and shall perish. Just turn back and look at me.

The jackal replied with a smile, “My lord, take hold of my tail and get up. Since you placed confidence in the words of one like me, without thought hence suffer the misery for which there is no help. It is said when you will take delight in the company of the good thou shall prosper: but as soon as you join the company of wicked men, you shall fall.

Then the elephant that had sunk in the deep mire was devoured by all the jackals.

Thoughtless confidence and company of wicked men, you shall fall.